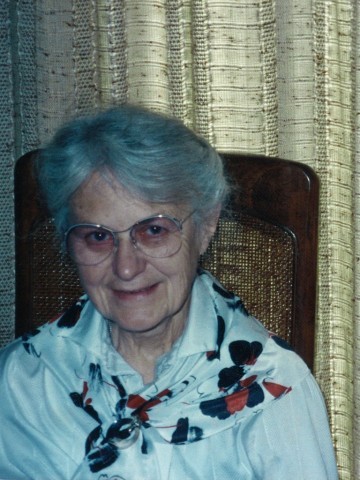 On August 17, 2013, our beloved Aunt and a friend to many, Annamerle (Merle) Hohenleitner, died in Christ. Annamerle was born in Portland, Oregon on March 10, 1923 to Marie LaClede (Kreider) and William J. Hohenleitner, the first of three girls.

Even from her early years, Merle was someone who marched to her own drum, and whether it was working the counter at the family bakery in LaGrande, Oregon, studying in New York to become a nurse anesthetist, professing and living her vows as a Franciscan Sister and later as a Third Order Franciscan layperson, aiding the aging, working with the poor, helping out with the students at Holy Rosary School, singing in church, or playing violin with the orchestra at Tacoma Community College, Annamerle brought her own style, verve and humor to whatever it was she touched.

At a time when most folks have long since retired, Annamerle achieved an A.A. degree, becoming one of Tacoma Community College’s oldest recipients.

Possessing a strong sense of spirituality, she attended many conferences and traveled to Europe, Asia and Central America to experience the various forms in which people find God. For herself, Annamerle always remained fascinated by and involved in her Catholic faith and sponsored a variety of folks as they began their own journeys into the church.

We offer our special thanks to both Cascade Park Vista and Manor Care for their diligent care of Annamerle. Should you wish to honor Merle with a memorial gift, we encourage you to donate to Francis House or any organization that serves the poor. Please leave online condolences at www.gaffneycares.com. Arrangements by Gaffney Funeral Home, 253-572-6003.