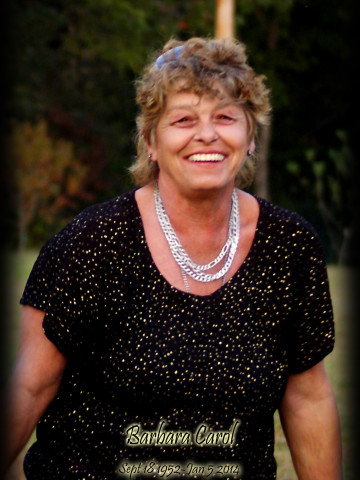 Departed on January 5, 2014 and resided in Hendersonville, TN

Barbara “Mammie” Carol Brigance, was born on September 18, 1952 to the late William and Margaret Burgess, and passed away on January 5, 2014. She graduated from Hendersonville High School, where she later became the custodian. She was an avid football fan and especially loved the Vanderbilt Commodores . “BB”, as she was lovingly known by friends and family, worked at Williamsburg Apartments doing maintenance. She will always be remembered for her strong will and her stubbornness, as well as a loving mammie, nannie, sister and friend. Ms. Brigance is preceded in death by her parents, and survived by her son, David Lee Brigance (Elizabeth), grandson, Jaxon Lee Brigance, sisters, Linda Castleman (Jimmy), Patsy Cole (Wayne) and brothers, William T. Burgess and Eugene Burgess. A life celebration ceremony will be conducted on Thursday, January 9, 2014 at 1 p.m. in the chapel of Hendersonville Funeral Home, with Rev. Troy Sadler. A visitation with the family will be held on Wednesday, January 8, 2014 from 2-8pm and on Thursday from 11 until service time. Interment will follow ceremony in Hendersonville Memory Gardens. 353 Johnny Cash Parkway Hendersonville, TN 37075 (615)824-3855 www.springfieldfh.wpengine.com