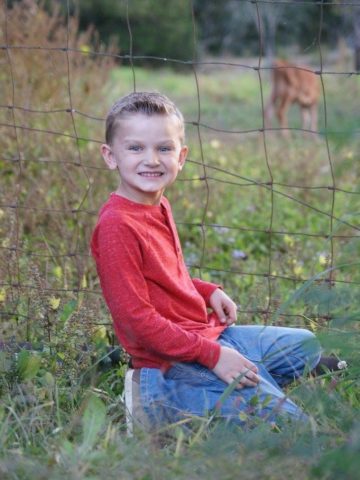 Braxton Knox Fuqua, age 8 of Greenbrier, received his heavenly rewards on Wednesday, May 29, 2019.

He was born on February 9, 2011 at Baptist Hospital in Nashville. Braxton graduated pre-school at Bethel Baptist Church and has completed the 2nd grade at Greenbrier Elementary School. Not only in baseball but life as well #5 Cardinal Braxton is an All Star in everyone’s book. He played with the City of Greenbrier Dixie Youth League. In 2017, Braxton and his team mates won the 5/6 State Championship, last year they came in 2nd and had the opportunity to compete at the World Series.

Braxton loves the Atlanta Braves and St. Louis Cardinals baseball teams but enjoyed watching any game that was on television or in person at the ballfield. During the fall, he enjoyed watching the University of Tennessee play football and Peyton Manning. Most days you would find Braxton playing outside on his four-wheeler, fishing, geocaching, on a scavenger hunt or finding hidden treasures with his metal detector.

Make a Wish foundation made it possible for Braxton to become an Honorary Army Air Assault Instructor with the 101st Air Borne, Ft Campbell, Kentucky and also provided him his canine companion Axel.

Through everything Braxton never lost the will to fight and his faith never wavered. He proclaimed Jesus Christ as his Saviour and was baptized along with his mom, Nicole, at Grace Baptist Church on February 15, 2019. Braxton will forever be remembered as a loving son, brother, grandson, and team mate. He will continue to be an inspiration to so many. February 9th will always be celebrated as Braxton Fuqua day in Robertson county.

The family will receive friends on Saturday, June 1, 2019 from 2pm until 8pm at Grace Baptist Church: 3181 Walling Road, Springfield, TN 37172. The family request that memorial donations be made to St. Jude Children’s Research Hospital in Memory of Braxton.

The family will have a private Life Celebration at a later date with Brother Steve Freeman officiating and coaches Josh Pulley, Tray Bostick, Ken Dorris, and Dud Connally serving as pallbearers. The Greenbrier All-Star team will serve as honorary pallbearers.