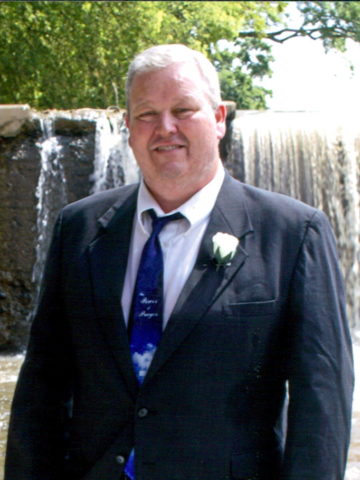 Born in Springfield, Tennessee on December 18, 1966

Departed on January 30, 2018 and resided in Adams, Tennessee

Brent Alton Edwards age 51 of Springfield, passed away on January 30, 2018 at his vacation home in Lewisburg, KY.

He was born on December 18, 1966 at Jesse Holman Jones Hospital to the late Orman Edwards, Jr. and Nancy Sue Edwards. He was a part of the graduating class of 1985 at Jo Byrns High School and continued his studies at Oral Roberts University in Tulsa, Oklahoma graduating with his Bachelor’s Degree in Biblical Theology and then moved to Dallas, TX attending Christ For the Nation Institute. He worked at a health food store in Dallas until he graduated and came home buying the Health Kick Store in Springfield. He was the owner and operator for the last 15 years.

He married the love of his life, Danie Denise Hester on July 11, 2002. They started each morning in prayer and daily devotions. Brent was so committed to his beloved that they have renewed their vows more times than Danie can count in their 15 years of marriage, the last being on December 23rd of last year in Springfield.

Brent was a gentle, generous man known to some as “Mr. Potato Head” since he brought a truck load of potatoes in once a year for the community. He believed that the Lord put him on this Earth to do good to everyone and anyone around him. Numerous good deeds went undetected in not only Springfield but around the world of things that was done in the name of the Lord by Brent. He enjoyed to traveling to the families Condo in Aruba, working on farm and visiting the house on the lake. You could find him in the fall at the Robertson County Tractor Pull and traveling with his friends to different pulls across Tennessee and Kentucky.

His life was full of love, laughter and happiness that was shared by his family. His whole world revolved around his wife, girls and his beautiful granddaughter Carlee. Anyone spending time with Brent and his crew could tell in a matter of moments that Carlee Jade had him wrapped tightly around her little finger. Brent and Danie had fun ballroom dancing not only socially but also in a few exposition shows featured on YouTube.

Brent will forever be remembered as a loving and devoted husband, daddy, Big Daddy, brother, and uncle.

In addition to his parents, Mr. Edwards is preceded in death by both sets of grandparents, and uncle, Vicky Edwards.

A Life Celebration will be on Friday, February 2, 2018 at 11:00am in the Chapel of Springfield Funeral Home with Pastor Curtis Hester and Brother Paul Edwards officiating. Burial will follow at Springfield Memorial Gardens with family and friends serving as pallbearers. The family will receive friends on Thursday from 4-8pm then again on Friday from 10:00 – 11:00 am.