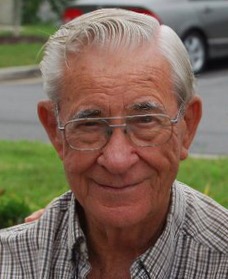 Departed on May 3, 2016 and resided in Fredericksburg, VA

Carl Savage Wilson, 85, US Air Force Retired, of Fredericksburg, passed away at Mary Washington Hospital on Tuesday, May 3, 2016 with his family at his side. Carl was born on April 22, 1931 to Ewing Carl and Anna Laura (Savage) Wilson in Robertson County, TN. He married Dorothy Mae Fort on July 29, 1950 in Springfield, TN. Carl joined the US Air Force, where he served for over 20 years, retiring in 1976. He and Dorothy moved to Fredericksburg to be closer to their grandchildren. Carl worked for several companies in the area before retiring a final time. He was a ham operator and belonged to the American Radio Relay League. Survivors include; his wife, Dorothy; son William “Bill” Wilson (Sharon); two daughters; Carolyn McCoy (Jim), Cheryl Smorto (Chris); Brother, Charles Edward Wilson; two sisters, Shelia Burton, Joyce Hodges (JD) 5 grandchildren: Alyssa Hadd (Kevin), Lindsey, Megan, Joseph and Zachary and one great grandson, Will. Carl was preceded in death by a sister, Betty Jean Rice and grandson Joel Wilson.
Visitation will be held Saturday, May 7, 2016 from 6 to 8 pm at Laurel Hill Funeral Home, Spotsylvania,Virginia. Funeral Services will be conducted on Wednesday, May 11th at 12 pm from the Chapel of Springfield Funeral Home. Visitation with the family will be one hour prior to the service on Wednesday. Arrangements Entrusted To: Springfield Memorial Gardens and Funeral Home (615)384-5437 www.springfieldfh.com