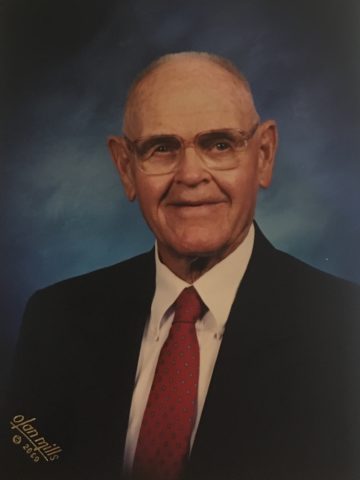 Departed on October 1, 2017 and resided in Springfield, Tennessee

He grew up in Eufaula, Oklahoma, one of eleven children to the late James Harrison and Lucy Belle Pruitt Smithee. As a child, he lived on a farm and worked in the fields to help make ends meet with his family. As he grew older, he left school at the 8th grade to take over more responsibility on the family farm.

At the age of 20 Claudie enlisted in the United States Army. Claudie is a veteran of World War II, where he served in the 712th Tank Battalion Company B, 90th Infantry under General George S. Patton and served in Germany as well as on the beaches of Normandy, landing 18 days post D-Day.

He served a total of four years before being discharged in 1946 where he moved from Oklahoma to California. He met Ms. Cora Elizabeth Hall in 1949 and married July 3, 1950. He worked for 43 years as a milk man and after retiring enjoyed his time raising goats.

A Life Celebration will be held at 11:00 am on Wednesday, October 4, 2017 in the chapel of Springfield Funeral Home with Rev. Marvin Wayne Ralph officiating. Burial will follow at Springfield Memorial Gardens, with Gus Gaches, Sr., Paul Venable, Buddy Hagerman, Gus Gaches, Jr., Buddy Hill and Ronnie Clouse serving as pallbearers. The family will receive friends on Tuesday, October 3rd from 4 to 8pm then again on Wednesday from 9am until the time of service.