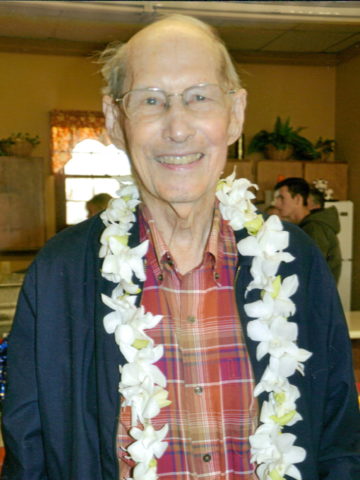 Departed on June 7, 2018 and resided in Coopertown, Tennessee

Elam S. Rusk age 91 of Coopertown and formally of Greenville, Mississippi passed away on June 7, 2018 at his home.

He was born on November 17, 1926 to the late Arthur and Minnie Sample Rusk in Washington County, Mississippi. He graduated from E.E. Bass High School in Greenville and started his career on the Mississippi River.

In 1948, E.S. became licensed to operate motor and steam boats. He served many years as a pilot traveling from lower Louisiana up the Mississippi River to the Ohio River. Working for many years for the Delta Queen Steamboat Company, he piloted the two largest paddle wheel driven river steamboats ever built, the Mississippi Queen and the American Queen.

He met Ms. Mildred Christine Ellis in 1947, after dating a few years, they ended their relationship. They both moved on marrying and having two children. Almost 50 years later, in 2000, Ms. Mildred Ellis Lipscomb was searching the internet looking to reconnect with old friends. While searching she came across E.S. Rusk and happened to find his phone number. Without hesitation, she picked up the phone and called. After one very long conversation and some visits, E.S and Mildred were married at Martin’s Chapel United Methodist Church in 2002.

E.S. and Mildred made up for lost time traveling to places like Hawaii and the Great Smokey Mountains. This past fall Cheryl and Jim took them to Boston, Massachusetts which proved to be a trip of a life time. They enjoyed going to church and spending time with friends. E.S. especially liked traveling the Cumberland River on the General Jackson.

In addition to his parents, E.S. is preceded in death by his siblings, Emmalou Cole, Carl Rusk, and David Rusk; and great-granddaughter, Kambree Reese McCarroll.

The family will receive friends on Wednesday, June 13th from 4-8pm at Springfield Funeral Home then again on Thursday from 9am until the time of service at the church.