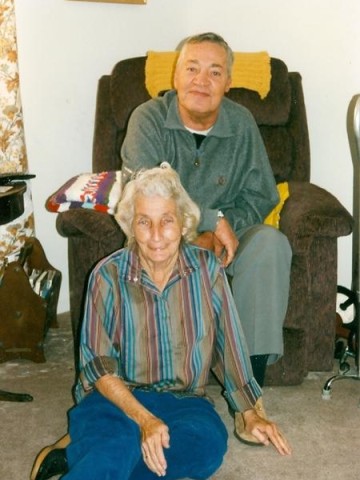 ENGLAND, ANDREW J. and MARTHA EVELYN-
Age 79 and Age 82 of Nashville, passed away together May 2, 2010 due to recent floods. Andy and Martha were married 59 years and attended St. Ann's Catholic Church. They had 6 children: Andy Brenda, Evelyn Richard Valiquette, David Lucia, Mark Denna, Sandy Daryl Downey, Kenny Wendy; 13 grandchildren and 8 great grandchildren. Andy was born in London, Ohio to Christopher and Emily England and had one sister Shirley. After 2 years in the Air Force he worked for South Central Bell for 35 yrs before retiring in the late 80's. He loved to fish and be outdoors and could often be seen working in the yard pulling weeds or trying to find anything to keep busy. He never passed up a good meal or the time to play a game or tell a story to his grandchildren. Martha was born in Knoxville, TN to John L. and Dixie O' Connor. She was the youngest daughter of 11 sisters and 1 younger brother. She never worked outside the home but had her hands full raising 6 kids. She never drove a car and could often be seen taking a walk probably to get a break from the kids and Andy. In her younger years you would see her sunbathing in the backyard or tending to her many flowers which she loved. A child of the depression she never craved anything flashy or fancy. She never met a stranger and loved to talk and play a game of high stakes bingo at the community center. Although she stood barely 5 ft tall and was very fragile she had no trouble holding a grandchild in her lap for a hug. Andy and Martha had lived in the same neighborhood in West Nashville since 1955 and had many good friends and neighbors who they loved and cared about. They will be deeply missed and never forgotten. The family will receive friends on Saturday, May 8 and Sunday, May 9 from 4 to 8 p.m. at West Harpeth Funeral Home, 6962 Charlotte Pike Nashville- 615 352-9400. A funeral mass will be held on Monday, May 10 at 11:00 a.m. at St. Ann's Catholic Church on Charlotte Pike. In lieu of flowers memorials may be made to St. Luke's Community Center.

14 Comments to Andrew and Martha England