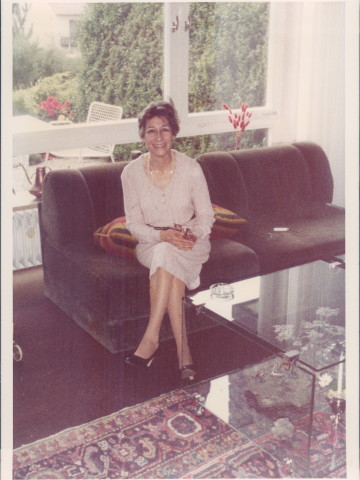 Departed on January 31, 2014 and resided in Hendersonville, TN

Fabiola Heredia Balee, of Hendersonville, TN was born on November 28, 1929 in Chihuahua, Chihuahua, Mexico, and went to be with the Holy Father on January 31, 2014. She studied at the Colegio Maria Martinez and attended business school in El Paso, TX, where she met and fell in love with Lieutenant Gunther Balee, U.S. Army. In 1952 they married, moved to California, and began their family. In 1961 Mrs. Balee, her husband, and four daughters moved to Puerto Ordaz, Venezuela. Aside from being a dedicated homemaker and mother; Fabiola was an eager philanthropist, becoming involved with the Peace Corps, Operacion Amigo, and the Venezuelan chapter of the Key Club. While in Venezuela, Mrs. Balee began a Catholic School for underprivileged children which is still in operation to this day. She and Mr. Balee remained committed to various organizations particularly those which championed education both in the U.S. and abroad. Fabiola became godmother to numerous Venezuelan and expatriate children, and spent many years as an instructor of religious education. In 1972, Mr. and Mrs. Balee moved to London, England, where Fabiola was involved with the American Women’s League and traveled extensively throughout Europe. Upon returning to the U.S. in 1978 Mrs. Balee once again made a home for her family, this time in Pittsburgh, PA, next in Charleston, WV, then in Naples, FL and finally in Hendersonville, TN. While living in Hendersonville, Fabiola forged many friendships, particularly at the Hearth Keepsake Village, where the staff soon became more like family. Fabiola’s family would like to thank them, and the Hospice nurses and volunteers for their gentle love and support. Throughout her life Fabiola remained dedicated to her family and her church. She has been deeply loved and will be missed by her family; her four daughters, Anna Schoch (Thorton), Liz Miller (Mike), Kathy McLean (Cameron), and Patricia Sena (John), their wonderful husbands, her ten grandchildren, and two great-grandchildren. A funeral mass will be held on Monday, February 3, 2014 at 11am at Our Lady of the Lake Catholic Church; visitation with the family will be from 10 until 11 at the church. HENDERSONVILLE FUNERAL HOME 353 Johnny Cash Pkwy, Hendersonville, TN 37075 springfieldfh.wpengine.com 615-824-3855