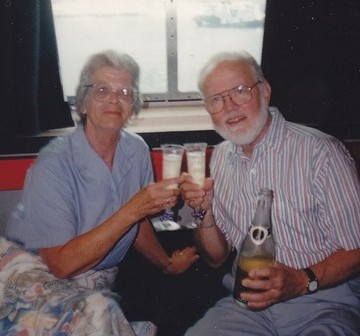 Departed on December 12, 2012 and resided in Nashville, TN

Les and Wanda – Together Again
On December 8, 2012, Leslie Sims Harrison, Sr., left to join his wife of 62 years, Wanda Ruth Harrison, who passed away on November 7th, 2012. They met and married in the small north Arkansas town of Heber Springs in the late 1950's. High school sweethearts, Les was on the football team and Wanda was a cheerleader. They both attended the college of Ozarks in Clarksville, Arkansas, where they became the proud parents of Linda Kaye and Anna Jo. A few years later, they moved to Nashville, where Les graduated from Scarritt College and they welcomed a son, Les, Jr,. Linda currently resides in Nashville; "Jody" Hearron lives in Fayettville, Arkansas; and "Young Les" deceased has been waiting on them since 1985.
The Harrisons spent time in Missouri and Texas before returning to Nashville in 1969, where Les became Director of Christian Education for West End United Methodist Church and Wanda became a Trust Officer with Commerce Union Bank. Les was also involved in local community theater as both an actor and director, and Wanda went on to work for the local and state affiliates of the National Association for the Education of Young Children. A change in profession found Les with the Tennessee Dept of Corrections, where he managed Death Row at Riverbend Maximum Security Institution until his retirement.
They leave behind six grandchildren, Stephanie, M'Keesha, Michelle, Grant, Jessica, and Cody, as well as nine great grandchildren; one great great granddaughter, and several beloved granddogs and grandcats.
A memorial service will be held at a later date.

4 Comments to Les and Wanda Harrison