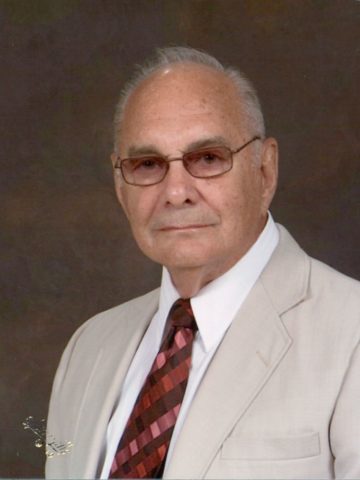 Departed on August 31, 2017 and resided in Springfield, TN

H.C. was born on January 22, 1925 in Chattanooga, TN to Hubert and Irene Green. His father, H.C. Green, Sr., was a cobbler and a minister, and they lived in several states as a family including McMinville, TN, Detroit MI, Montgomery, AL, Jackson MS, and Nashville, TN.
H. C. attended Dasher Bible School in Valdosta, GA and graduated in 1943. He then attended David Lipscomb College in Nashville for one year, but then joined the Army in 1944-1946. He was a staff sergeant and began his service in the Philippines for 6 months. From there he was on his way to Japan when the atom bomb was dropped in Hiroshima and Nagasaki. He served one and one half years stationed in Kobe, Japan.
H.C. came back to David Lipscomb College in 1946 and then attended Tennessee Technological University in Cookeville from 1947-1949. He earned a Bachelor of Science degree in Agriculture. While in school he attended church off campus where he met Billy Holliman. Billy was a neighbor and good friend of June Sparks. After church one Sunday night, Billy invited H.C. and other friends from church to come to his home for some food and fun. Billy also invited June Sparks to come over, thus, a relationship was born which began with H.C. sharing a pimento cheese stuffed celery stick with June in Billy’s kitchen! June began dating H.C. and going to church with him which eventually started their new life together. They were married on November 24, 1948 in Gainsboro, TN at the home of one of H.C.’s best friends and college mates, Joe and Bettye Alley.
They moved to Nashville where H.C. worked for L&C Insurance Co. they then moved to Cookeville, TN and H.C. worked at Pendergrass Hardware under the supervision of his new father-in-law, E.H. Sparks. H.C. then received a job offer with the USDA in Smithville, TN in 1952. From there he was transferred to Rutledge in Grainger County as a soil and water conservationist and then on further east to Blountville in Sullivan County for 20 years. The Greens then moved back to Middle Tennessee where he became the district conservationist for Robertson County in Springfield.
H.C. had many interest and hobbies such as gardening and swimming, but he got the most pleasure spending time with his family and taking a beach vacation every summer as well as spending time serving his church as an elder or deacon. He taught Bible classes for many years and had a beautiful base voice. Everyone enjoyed his singing which would lead many new friends to ask of whose the voice was. He received comments throughout his life for having this beautiful gift. He also sang in a quartet while at David Lipscomb College.
H.C. has also supported a minister for years in Ghana, West Africa named Francis Mensah. Brother Mensah has established a church in Esiama-Axin as well as numerous church plantings in other regions under the name of the Elder H.C. Green Evangelical Team. Many baptisms have resulted from these new churches.
H.C. and June had one son, Phillip Neal, and a daughter, Linda Suzanne.
H.C. and June were married almost 63 years before her death on November 11, 2011. They are survived by their children, Phillip Green of Springfield, and Suzanne Green Howe (Jeff) of Greenbrier, 2 grandchildren, Adrienne Leigh (David) Goodfred, and Andrew David (Olivia) Stearns, 3 great-grandchildren, Matthew David and Micha Daniel Goodfred and Isabelle Ruth Stearns.
H.C. is also survived by one sister, Flora Nowlin and husband Rex of Norman, OK as well as numerous nieces and nephews.
In addition to his parents, H.C. is preceded in death by one brother, Harold Miller Green, and one sister Margaret “Peggy” Green Cauthen.
In lieu of flowers, memorial contributions can be given to Francis K Mensah, Church of Christ PO Box 34, Esiama-Axim, Ghana, West Africa or to Alive Hospice, 1718 Patterson St., Nashville, TN 37203 or alivehospice.org.