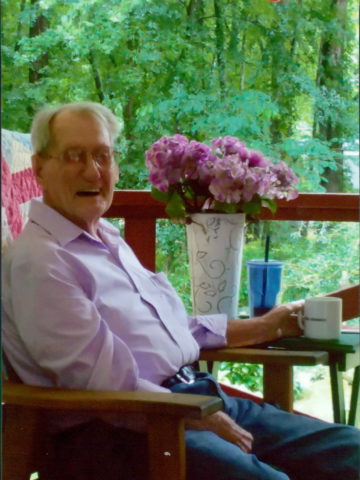 Departed on November 14, 2018 and resided in Springville, TN

Howell Franklin Johnson, age 92 of Springville, Tennessee and formally of Springfield passed away on Wednesday, November 14, 2018.

Hal was born on March 14, 1926 the late Overton and Lola Johnson in a small town in southern Illinois. He was the son of a coalminer and was one of nine children. During high school, Hal went to work at a grocery story and then started selling insurance door to door saving money to purchase his own car. Even though he was the youngest in his community to own a car he learned a great life lesson about working hard for something he wanted.

Hal entered the service on June 7,1944 becoming part of the United States Navy, he was honorable discharges on March 4, 1946. Upon returning from the Navy, Hal married and raised seven children. He worked with Kent Plastics Division of Ball Corp, where he traveled to Ireland to help open a factory. After he retired from there, he was Plant Manager at Southern Heel.

He worked as a consultant for a while, then his passion from a childhood kicked back; AS a child his family would camp and fish on the Big Muddy River. That would bring him to Kentucky Lake. Hal would spend a lot of time with his brothers in the Florida Everglades and Lakes hunting and fishing. Hal and Kathleen spent many days fishing on Kentucky Lake: A Place they both loved. He always said when he couldn’t see the bobber anymore, he would give up fishing. Unfortunately, that day came when glaucoma took over.  Hal also suffered with Alzheimer’s, but he never gave up. His will was strong and kept him going for 92 years. Hal loved music and would listen to gospel music while sitting on his back porch for hours. That was a comfort sometimes he and Lesa enjoyed and sometimes Lisa would sing to him the old church hymns. It was another comfort from his childhood, listening to his father lead the singing at their little Country Church.

In addition to his parents, Hal is preceded in death by his siblings, Carl, Leslie, Toby, Al, Violeline, Arlene and two infant siblings.

A Life Celebration will be held on November 24, 2018 at 1:00pm with Molly Hudgens and James Mulcahy officiating. The family will receive friends on Saturday from noon until the time of service at the funeral home.

In lieu of flowers donations can be made to the St. Jude Children’s Hospital or the Alzheimer’s Association