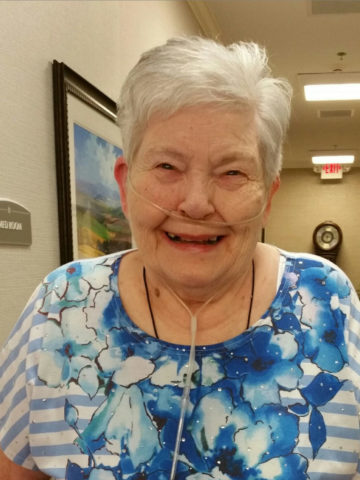 She was born on January 16,1939 in Orlinda, TN. She was the oldest of the children born to the late Joe Henry and Lillie Mae Woolbright Clinard. Growing up on a farm in Robertson County, Jo Ann knew the rewards of working hard and providing for her family. Many times she would have two jobs to support her oldest three children before meeting and marrying William Dean Byrns. This dedication to her family would become useful over the years.

Jo Ann would be blessed with four children and later a host of grandchildren and great grandchildren. Birthdays were always a big celebration with Jo Ann and she would go all out with dinner. Memories of dinners in her quant duplex with seating for three, being packed with their family waiting for their favorite dish that Jo Ann made for them, they would have everything making sure everyone had their favorite dish or dessert.

She enjoyed sewing, making all of Judys formals she needed growing up. Jo Ann continued sewing for her grandchildren and great grandchildren alike over the years, even sending her great granddaughters matching dresses to Germany, which fit perfectly. Her ability to look at someone and make it fit perfectly was a special gift.

Jo Ann loved to read and enjoyed the quiet. However you could guarantee that she would be watching Jeff Fisher coach on Sundays. If you called you would get a full run down of what was going on.

She will forever be remembered as a sassy women that loved her family and was as tough as pine knots.

In addition to her parents, Jo Ann is preceded in death by her husband, William Dean Byrns; Great Grandson, Kevin Dunn; son-in-law, David Poff; four brothers and one sister.

A graveside service will be held on Thursday, March 21, 2019 at 2pm with Brother Arlin Troyer officiating in Springfield Memorial Gardens with family and friends serving as pallbearers. The family will receive friends on Thursday from 11 am until the time of service.