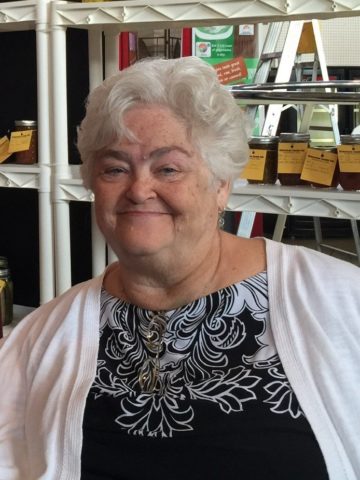 Departed on February 22, 2021 and resided in Springfield, TN

Mary Patricia “Patty” Summers Evilcizer was born to Buford and Jesse Lee Summers in Springfield, Tennessee. She was the third of four children and their only daughter. Growing up, she was a lifeguard for the Springfield swimming pool, served as a counselor at summer camp, and volunteered with the bloodmobile.

On July 29, 1960, Patty married Larry Evilcizer at the Springfield Nazarene Church and they became one. Throughout their 60-year marriage, they would raise two daughters, work tirelessly in the church, care for many people in the community, and grow a family legacy.

Patty was an excellent cook, enjoyed reading her Bible and suspense novels, and was a champion at Words with Friends. She was the matriarch of her family, served as a family historian, and hosted gatherings every 4th of July, Thanksgiving, and Christmas. She would often say there was “always room for one more at the table”. People would describe her as loving, strong, talented, and devoted. For decades, Patty taught Sunday School, led a Women’s Ministry, and sang in the choir. She enjoyed traveling to see her brothers while they were in the Air Force, would plan extensive road trips for the family, and even traveled abroad. Patty was a lifetime member of Girls Scouts, supported veteran’s organizations, was an active member of the Cross Plains FCE Club, served as a Robertson County Fair Superintendent and participated in the library reading club. She loved to sing with her brothers, spend time with her daughters, taught her grandchildren to swim before they could walk, partnered with her cousin Marjorie to complete countless special projects and planned numerous weddings, showers, and church events for friends and family.

She is proceeded in death by her parents and siblings, Harold “Dennie” and Nereida Summers, David Summers and Neal Summers. Patty is survived by her husband, Larry Evilcizer, daughters Lorraine Hendrixson (Doug) and Dianna Hodges (Michael), grandchildren William Hodges (Shannon), David Hendrixson, Joshua Hodges (Amelia), Elizabeth Tucker (Ryan), Zachary Hodges (Lyrik), and Steven Hendrixson (Emily), and great-grandchildren Hunter and Madison Tucker. She was anxiously awaiting the birth of her third great-grandchild Baby Girl Hendrixson. Patty is also survived by her sister-in-laws, Josephine Summers and Terry Summers, as well as a host of nieces, nephews, and cousins.

Visitation will be held on Thursday at 10am with a memorial service to follow at 11:00 in the Springfield Funeral Home Chapel with Brother Doug Hendrixson and Dr. Pedro Cruz officiating. Online condolences can be made at www.SpringfieldFH.com.

In lieu of flowers the family request donations be made to the Native American Christian Academy. Donations can be made at www.nativeamericanchristianacademy.org.