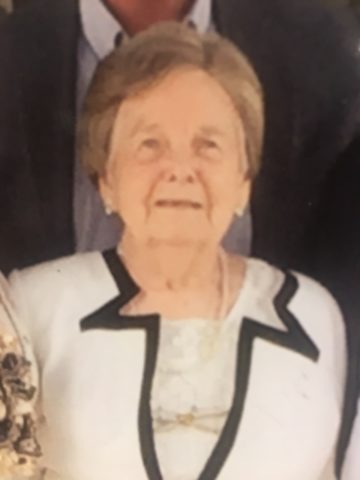 Departed on July 21, 2017 and resided in Goodlettsville, Tennessee

Phyllis Jean Snyder, age 93 of Goodlettsville and formally from Lillian, Alabama passed away on July 21, 2017 at her home.
She was born on November 17, 1923 to the late Alexander and Elizabeth Hynd in Clearfield, Pennsylvania. She married her husband James Macklin Kimbrough in 1945 and was blessed with four wonderful children. She met her second husband Ben as mutual friends and was married in 1990.
Mrs. Snyder enjoyed spending time with her family and her close friends, Beth Eachor, Wanda Hook and Wilma Spivey. Beth and she started a Red Hats Society in Lillian and was the Queen Mother for years. The four of them traveled to Spain, Scotland, Ireland and an Alaskan Cruise.
In addition to her parents, Mrs. Snyder is preceded in death by her husbands, James Macklin Kimbrough and Ben Snyder and son, Scott Gray Kimbrough.
She is survived by her children, Carl (Jerry) McKinney of Springfield, Tennessee; Rob (Tanya) Kimbrough of Englewood, Colorado; and Mac (Adrienne) Kimbrough of Boliver, Ohio; 9 grandchildren and 11 great-grandchildren.
The family will have a private memorial service at a later date.
These arrangements were entrusted to Springfield Memorial Gardens, Funeral Home and Cremation Center : 4005 Memorial Blvd Springfield, TN 37172 615-384-5437 www.springfieldfh.com