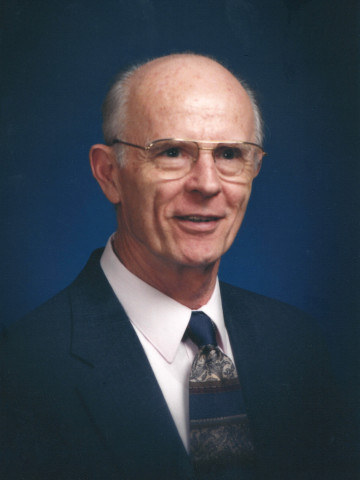 Departed on April 18, 2014 and resided in Hendersonville, TN

Bob and his sister Avalon grew up in a farming community in north central Kentucky. Bob graduated from Mason High School in May 1943 and joined the Army in January 1944. He was proud to serve his country in World War II in Germany and Japan 1944-46, and later in Korea 1949-50.

In the fall of 1946 Bob enrolled in the University of Kentucky, thanks to the GI Bill, where his major was Electrical Engineering. After 1 year at UK, Bob & Emelie were married in 1947. A year later, he began his career at Cincinnati Gas & Electric (CG&E), while he finished his degree at the University of Cincinnati. He worked as a computer programmer, a manager of programmers, Manager of Systems and Methods, and Manager of the Rate Department.

They raised their family in Erlanger, KY. Bob served in so many ways in his community, as a city Councilman, on the School Board, and in their church as a Deacon, Elder and Board Member.

After several years of retirement, in 2007 they moved to Hendersonville to be near family. At Park Place, he was an ambassador of good will, designated photographer, and chauffer to doctors for several friends. He will be missed by family and friends.
Bob was proud to be an American and devoted his life to God, family and friends. After a long and enjoyable life, he died of a heart attack here in Tennessee.

He is preceded in death by his sister, Avalon Pennington. He is survived by his loving wife of 66 years, Emelie Chipman Daniels; son, Barry K. Daniels (Daryl); daughter, Beverly Kendig (Jim); grandchildren, Erica C. Daniels, Lindsay E. Weldon (Aaron); Nicole, Krista and Michael Kendig; great-grandchildren, Elijah and Abel Weldon; nephews, Doug and Robert Pennington.
A memorial service will be held on Monday April 21, 2014 at 2p.m. in the chapel of Hendersonville Funeral Home with Pastor Doug Varnado officiating. A memorial gathering will be held prior to the service from 12-2pm. at the funeral home. In lieu of flowers donations may be made to YMCA Camp Ernst or YMCA Ocoee. HENDERSONVILLE FUNERAL HOME 353 Johnny Cash Pkwy Hendersonville, TN 37075 (615) 824-3855 springfieldfh.wpengine.com