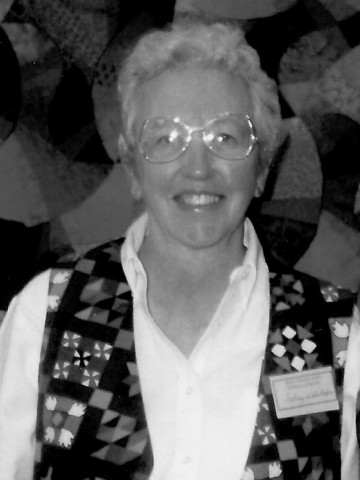 Departed on March 22, 2014 and resided in Hendersonville, TN

She was born on September 23, 1934 in Johnsonburg, PA. Sehoy received a Bachelor of Science in Education from The Pennsylvania State University in 1956 and became a high school math teacher. She married John Arthur Welshofer in 1959. They lived in several towns in Pennyslvania and Ohio before settling in Hendersonville, TN, in 1990. Sehoy worked a series of part-time jobs to help put her children through college.

Sehoy is survived by her husband, John Arthur Welshofer; her brother, Bill Bosler; her daughter, Barbara; her sons, David and Jay; and her grandchildren, Max and Alex.

An expert quilter, Sehoy was a member of the Lakeshore Quilters’ Guild from 1990 until her death. In 2001, she started a small, informal quilting and sewing group of close friends who met weekly in her home until her death. Sehoy touched many people throughout the years through her generosity and her teaching of quilting.

In addition to quilting and sewing, Sehoy was accomplished at basket-weaving, knitting, embroidery, cross-stitch, crochet, and Pysanky (Ukrainian Easter eggs).

A memorial service for Sehoy Lynn Welshofer will be held on Thursday, March 27, 2014 at Hendersonville Memory Gardens & Funeral Home, 353 Johnny Cash Parkway, Hendersonville, TN, 615-824-3855 springfieldfh.wpengine.com. Visitation will take place from noon to 2:00 p.m., followed by the service at 2:00 p.m.