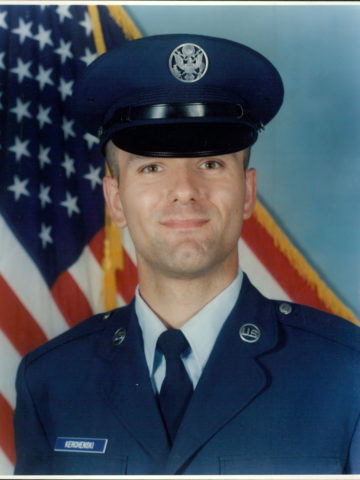 On Saturday 13 July 2019, Vincent Stephen Kerchenski, loving husband of Danie and father to Ellyn and Rosie, passed away at age 55 after a fierce five year battle with colon cancer.
Vince was born on April 11, 1964 in Garfield Heights, Ohio to James Sr. and Patricia (Takacs) Kerchenski. He came into this world too early and spent his first four weeks in an incubator at Marymount hospital. He was a hard to keep down after that! Vince graduated from Chanel High School in 1982. He joined the United States Air Force and served at McGuire AFB for four years and then joined the Ohio Air National Guard obtaining the rank of Senior Master Sergeant. He deployed to both Iraq and Afghanistan. Vince completed his Bachelors degree in Engineering at The Ohio State University in 2002 while working full time. He joined Buckeye Steel in Columbus, Ohio and then later moved to Russellville, Kentucky where he joined Logan Aluminum. He leaves many friends and acquaintances at Logan and loved his co-workers immensely. Vince was a member of First Presbyterian Church in Russellville and greatly enjoyed his Pastor Tom and members of the congregation
Vince had a passion for woodworking. He made many of the fine pieces of furniture in his home and was known to surprise people with cool gifts of chopping blocks and candle holders. He was the epitome of an engineer; always looking for things to take apart and improve upon. He could fix just about anything. He was also an avid music lover, he played the trumpet and guitar and loved to attend concerts most recently attending his daughter Ellyn’s conducting recitals. He loved softball and could often be seen at Logan County High School watching his daughter Rosie knock one out of the park. He had a passion for bowling and golf and was semi pro in his younger years. Vinnie was known for his quick wit, his infectious smile, his ability to memorize and recite movie lines with his daughters and his kind and compassionate spirit.
Vince was preceded in death by his father, Jim, his uncle Bill and his grandparents. He is survived by his wife Danie; his two children, Ellyn and Rosie; step-daughters, Candis (Jacob) Hudman, Kimberli (Chris) Callis, and Krista Edwards; his granddaughter, Carlee Hudman; his mother, Pat, his mother and father- in-law, Hazel and Curtis Hester, his sisters Marlene and Debbie Kerchenski, Laurie, brother-in-law David Duke and nephew Collin, and his brother Jim Jr and his wife Kison. A life celebration service will be held on Saturday, July 20, 2019 at 4:00 PM at Springfield Funeral Home officiated by Pastor Curtis Hester and Chief Mark Dyer. Visitation will precede the service from 2 – 4 PM. Inurnment with military honors will follow at Springfield Memorial Gardens