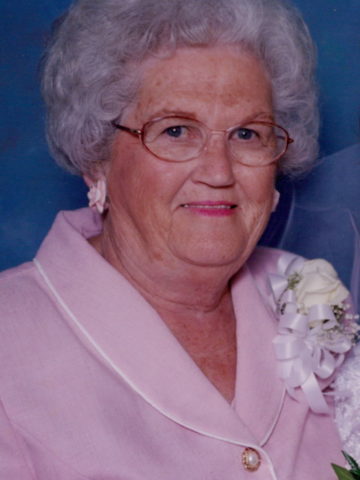 Departed on November 4, 2016 and resided in Adairville, Kentucky

Mrs. Baldwin was described as a loving, Christ-Like, faithful women and lived by the word “J.O.Y”, Jesus first, others next then yourself. Her favorite past times included cooking dinner for the family and anyone that would stop by, baking her famous Fried Apple Pies and gardening. She entered her flowers every year at the Community Strawberry Festival and worked the Pet Show.

Her passion didn’t just stop at her family, it extended to her church by teaching the RA boys class, working with missions and also the American Red Cross during WWII rolling bandages. A story that was told is when Mrs. Baldwin had extra vegetables she would make soup for the families close to her home that had a need.

In 1950, Hollace and Virginia bought their farm in Adairville where they would raise their children. They worked side by side raising sheep and later transition to dairy cattle milking twice a day and other farm duties. Then in 1958, they would build “The Truck Stop” on Hwy 431 in Adairville to serve the travelers that would be passing through, the most famous being Elvis Presley. She worked hard for her family and friends, making sure they had a full belly and joy in their heart, between Hollace and Virginia it wouldn’t be long before there was laughter and a good time to be had.

A Life Celebration will be held on Monday, November 7th at 12 noon at the Adairville Baptist Church, 327 W. Gallatin St. Adairville, Kentucky, with Pastor Carl Fruedenthal and Brother Michael Edwards officiating, burial will follow at Greenwood Cemetery in Adairville, KY. The family will receive friends on Sunday, November 6th from 2-6pm at Springfield Funeral Home 4005 Memorial Blvd Springfield, TN 37172, then again on Monday at Adairville Baptist Church from 10am until the time of service.

These arrangements were entrusted to Springfield Memorial Gardens, Funeral Home and Cremation Center.